Fraser-Henderson is: Barb Fraser and Dennis Henderson, singer-songwriter duo, who perform their original acoustic/electric folk/pop music in Vancouver, BC. Before they met, Barb and Dennis each had a background in various styles of music. They performed, toured, and recorded, folk, blues, country, rock, and more!  Sparks flew when they were playing and recording in an original rock and pop dance band in Vancouver. As their personal and musical lives blended -voila!- the musical duo Fraser-Henderson was born.

The music they create together ranges from haunting references of the natural world to advice on the simple pleasures of life: memories and reflections of what comes our way in the "every day".
Using driving rhythms or the sweet interplay of guitars and voices, they conjure moods and tell stories- drawing us to the places that we all share. Whether writing songs beside lonely lakes, in Mexican hotel rooms, or late at night beside the kitchen table, Barb and Dennis create music that speaks to the heart... 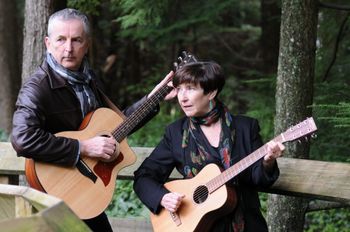 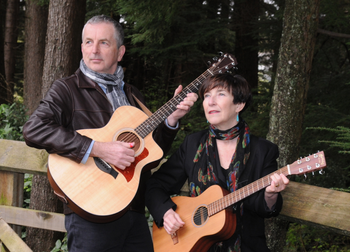 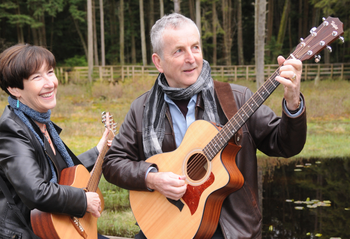 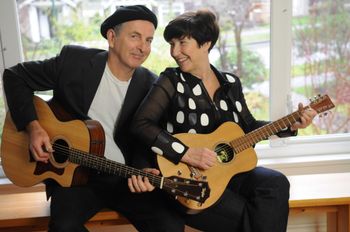 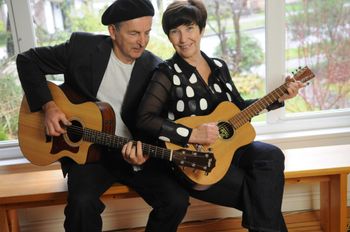 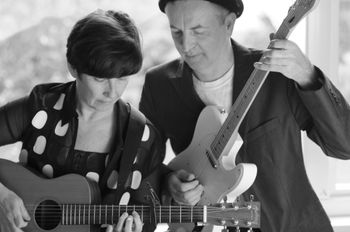 Duo exploring their sound:
Fraser and Henderson to play Genesis

Barb Fraser and Dennis Henderson will be adding another
element to their sound next Friday when they perform at
Ladner's Genesis Theatre. Henderson will debut his banjo
at the latestlive@5005 concert. "We're exploring our sound.
We've been writing for many years so we're developing a
little bit of a catalogue of songs" says Fraser. "We decided
we wanted to mix up the flavour a little bit. It's an amazing
instrument. Dennis always amazes me, he just picks the
darn thing up and starts playing. He's very talented."
Henderson says the instrument has a certain beauty in its
sparseness."That's what I like about it."
The couple "met many years ago" while in a Vancouver band.
They both sing and play guitar with a style that includes
roots, folk and also has a foot in popular music. "We've played
in so many different kinds of bands together and separately,
we kind of meld all those influences, " says Henderson. Fraser
notes they'll give a nod to a few of their influences with cover
songs at the upcoming show ranging from Alison Krauss,
the Reverend Al Green and Bob Marley. They have studio time
booked for early July. For updates visit fraser-henderson.com.

Linda Kidder will be a special guest at the upcoming concert.
Kidder has previously performed at Genesis as a part of the
Cruisin' with the Boomers show as well as with the band August.

"Congratulations on a wonderful concert!

Well polished, delightful sound, thoughtful arrangements and well conceived solos all complemented by the beautifully blended vocals. Even better, the real strength of your compositions are your lyrics; I really enjoyed being transported into the stories you told like a magic carpet ride. The metaphors were subtle yet powerful, too.
The singles you chose of other composers showed your influences yet you remained true in form, style and substance to your own creations. You both have a musical intelligence that rings through, for sure: your ability to remember lyrics while balancing precision, intonation and expression still blows me away."

"Thank you! Loved having you two. I am so glad we had a big appreciative audience for you."